Getting a Japanese Driver's License: The preparation

My first stop of the day was the Japan Automobile Federation for a translation of my American driver's license. It is required by the Licensing Center and is the most expensive step in the process at 3000 yen for translating a grand total of 4 important pieces of information. They are: Date of issuance, type of license (car, motorcycle, commercial vehicles, etc.), restrictions (contact lenses), and Date of expiration.
Because I lost my wallet at a phenomenal Badger football game 1 month before my departure to Japan, I had my license replaced. The issuance date was only 1 month prior to my arrival in Japan. This apparently is a problem for the licensing centers in Japan as they make you prove that you had your license at least 3 months prior to your arrival. The popular belief is that they instituted this regulation to prevent Japanese nationals from flying to the US to get a license and then flying back without any actual driving experience. I guess it makes sense. You have to consider this, a typical John Smith (or in this case Yamada Taro) would obtain licensure through a certified driving course that would cost the equivalent of $3000 and several months worth of classes.

Anyway, to prove that I have been driving since I was 15 years old, I had the Wisconsin DMV print out an abstract of my driving history. This cost $5.50 and was all done online without any problems.

So I ran this with my Wisconsin Driver's license to JAF offices near Hamamatsucho, Tokyo. Paid my 3,000 yen and it took about 20 minutes for them to translate those 4 pieces of information for me. 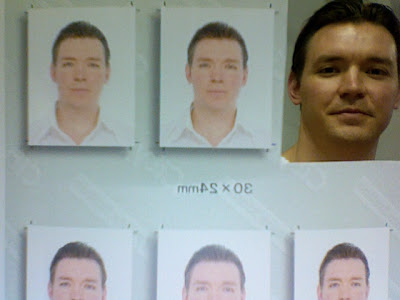 Then I ran over to the Tokyo licensing center near Oimachi station. I handed them my passport, alien registration card, my American license, the hot-off-the-laser-printer translation, and a headshot from the picture booth (700 yen, about $8.85 with today's exchange rate).

They took my information and I waited. Unfortunately I was behind a group of three Arab guys, an ornery middle-aged New Zealand women, and an even more cantankerous Japanese guy who shouldn't have even been in line at the "Application to convert a foreign license to a Japanese license" desk. It took 2.5 hours for the staff to call my name. The call came 5 minutes before I had to depart for work. I thought, "Oh great" and asked the woman if I could come back to finish another day. Of course, I received a pleasant, "If you come back another time, you will have to do everything over again." I was fuming at this point, especially because between the NZ woman and the Japanese dude, I know there was at least an hour of decent DMV staffers time wasted in pleading and arguing. My one consolation is that the Japanese dude did not get what he came for. I, on the other hand, can boast a tale of success.
Well, sorta...
On Tuesdays, my first lesson starts at 5:30pm.
It was already 4:25pm when my paperwork was partially ready. When I was called to the service window the second time, I was told to do the following:
"First go down stairs to offices 3 and 8"
Office 3 was an eye exam. Office 8 was the cashier.
"Then come back to this window"
I dashed away from the window and scrambled for the stairs.
At 4:30pm, I arrived back at the main window relieved that I had somehow managed to finish in time.
Alas, I wasn't finish.
"Time for the written exam"
[4:31pm] I was taken to a touch screen computer (possibly one of the first CRT touch screens, who knows!)
and had to answer 10 questions in English (the only English I encountered all day).
The guy before me apparently failed with 6 of 10 and passing is 7 of 10.
Again I thought, "Oh great".
10 of 10, boo yah! Thanks to this website about testing centers and the driver's test in general.
Next, the staff returned my documents and put it into a large envelope.
4:35pm: In Japanese
"Now you should go downstairs and schedule a driving test"
!?!?!
Again I dashed away from the window and scrambled for the stairs. Only this time I managed a rather loud utterance of a 4 letter explicative. Sorry Ma.

[4:36pm] I handed the overstuffed envelop to another waiting official. While he prepared a card for me to schedule an appointment for the Practical driving test, a police officer and another staff member commented on how I looked like their friend "Ikeda". The fact that I am fairly tall and unmistakably white did not deter them from remarking directly to me on the subject.

[4:40pm] Finally, I made an appointment for a practical driving exam (only 3 weeks away) and was released from the Japanese DMV. I proceeded to sprint the 3/4 mile back to the station, literally jumping the center median of a 4 lane highway and dodging pedestrians, mopeds, and one rather cool looking Alaskan husky. I arrived at the station at 4:45pm, drenched in sweat...although I was dressed to impress today, there wasn't a single cool cell left in my body. I again found myself scrambling for the stairs, this time to get to the train platform. And just as the train doors were closing, I shoved my hand in the door. I waited and prayed that the conductor would open the door. Instead, he opened the doors slightly, thinking that I would simply remove my hand. I didn't budge. He had to do it two more times with me glaring all the way down 10 cars before I realized he wasn't going to budge. So out of sheer will and determination not to let the Japanese DMV make me give up my perfect attendance record at work, I pulled a "Hulk" and forced that door open.

After spending $52.34, and about 6 hours in bureaucratic hell, I made it to my first lesson of the evening with 5 minutes to spare (albeit still sweating from the muggiest summer I have ever experienced as well as the fastest three-quarter mile sprint of my life). And what do I have to show for it? Well, to be honest not much more than a slightly amusing (or rather, bemusing) story to tell the kids and an appointment for what is certainly going to be more pain and toil.

But as Grandfather always said, "Keep looking up."
I only pray that the hard part is over.

I just checked out the newest Bubby's restaurant under Tokyo Station (Yaesu Chika). I was recommended by my co-worker to go check it out after I said I wanted to eat an American-style breakfast like Denny's Grand Slam Breakfast. Jeff's first recommendation was Bubby's stating that he often goes to the Bubby's located in Ark Hills. So I went. While the atmosphere and service is great, the breakfast I ate was lacking.

First of all, the breakfast menu was small. I could choose from French Toast (3 styles), Pancakes (4 styles), and a breakfast set called The Yaechika Plate. I asked for the Plate since it included toast, fried potatoes, a fruit cup, and an omelet-like preparation with mushrooms and eggs.

The toast was rye. Ok, no problem, I like rye bread. Plain white bread which is readily available at any convenient store would have been better. At least provide the choice. And of course, include some jelly either on the table or on the plate. The omelette was fair. The shredded cheese on the top was served cold. The fried potatoes was the only thing I thought was authentic. I quite enjoyed the bacon it was fried with.

I also tasted the French Toast. Again their choice of bread was a little different. It was prepared on a French baguette. I personally would have been fine with Texas-style toast, also readily available at any 7/11 convenient store. It was soggy and a little undercooked.

I can recommend only the fried potatoes. Traditionally, however, I think the omelette should be as big or bigger than the potatoes. In this case, the potatoes were double the size of the omellette.

Overall, this experience was underwhelming. The menu was too small and the food did not meet me already very low expectations. It is clear to me that this is still a new shop. The staff and cooks are probably still acclimating. But for now, I would suggest avoiding the Yaesu Bubby's restaurant until they get some things straightened out, in my humble opinion.
Posted by jletsgo at 9:35 AM 2 comments