At my company, I was asked to teach a contractual out-service. This is a special contract setup between Berlitz and another company, to provide English instruction to that company's employees. Usually these lessons take place outside the typical class setting at a Learning Center. This particular contract is being taught once or twice a month at the company's main office very near Tokyo station in one of the many surrounding skyscrapers. In fact, the office where I have been teaching has a spectacular view from the 30th floor overlooking the Imperial Palace. I make the 5km run around these grounds (follow the tree line around) once or twice a week. 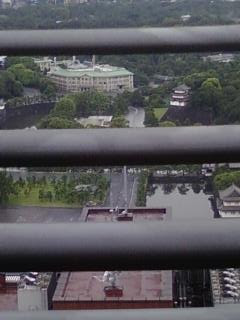 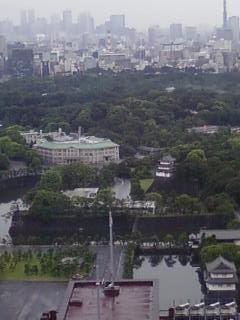 In the last lesson of the day, my colleagues and I decided to bring our groups together for a final 1 hour group project. The lesson theme for today was project management. So we thought it fit to assign them a group and a project and try to work things out in English using the phrases and communication skills we had just learned.
The project was to build a paper tower using a limited amount of supplies. Towers were evaluated based on several criteria including height, aesthetics, and stability.

This project incorporated a 15 minute planning session where the group decided their plan of attack. They assigned roles, determined a target structural plan, and so on. It was absolutely fascinating because some of the students are structural engineers and some of the plans they hashed out were amazingly detailed. One group had actually calculated the maximum achievable height based on the dimensions of the paper. Then, after 10 minutes we introduced the first twist of the project, personnel reassignment. We rotated one member from each group to different group siting some plausible reason, such as overseas job transfer. We gave them the remaining 5 minutes from the initial 15 to bring the new member up to speed.
Next, began the actual construction. I caught myself staring amazed and jaw-dropped. These guys came up with some amazing structures. They definitely achieved the use of the target language which was also a great feeling.
And then, half way through (they were given 20 minutes to build), we shuffled the groups again exchanging one more member and forced them to reiterate goals and reassign roles in order to meet the deadline. Utter caos for the students, sheer delight for the instructors. It was awesome!

Here are their completed structures.

A true sign that things are picking up is the infrequency of my blog posts. If I had to weigh it all out, I would say its not only a great thing, its fantastic. Staying busy, staying healthy. Can't ask for more than that. Tokyo summer is staying true to form, unbearably hot and humid.
Tonight as I finished my run around the Imperial Palace, a popular pass-time for nearby residence, I was actually stopped by a police officer and was told that if I didn't put my shirt back on I would be taken to the Koban. I have a feeling that this young officer wanted to flex some muscle more than anything and I highly doubt there is an actual law against running in the hot, muggy Tokyo summer shirtless. My guess is he reacted more out of custom than anything. I know it is considered indecent by Japanese cultural standards. And I don't do it every time I go running; only a handful of times in the past four months. But not having any fight left after a 30 minute run, I didn't argue and donned the shirt. But believe me, I will do it again tomorrow if the weather is just as hot.

On another note, I started working part-time as a translator and native English checker for a small Japanese law office. Finally, a small goal fulfilled, I hope to get some use out of all those years of Japanese language study at the UW.

This weekend I am planning to relax a little, teach a few private lessons and spend a Sunday at the beach with some friends. Apparently this will be one of the last good weekends for swimming in the Tokyo area because a giant mass of jellyfish turns up every year around August 18th...or so I am told and this event can make the whole swimming experience a variable pain in the @$$.
Posted by jletsgo at 11:46 PM 4 comments

Today I had lunch with my buddy and former classmate "Kobayashi". We first met in the Japanese department, studying (mostly over beers) at the Japanese conversation table in the Memorial Union.

August 8th being his birthday, we met up for a pre-birthday luncheon to discuss the weekend birthday plans. Nick chose TY HARBOR in Shinagawa (Tokyo). Turned out to be an awesome choice. 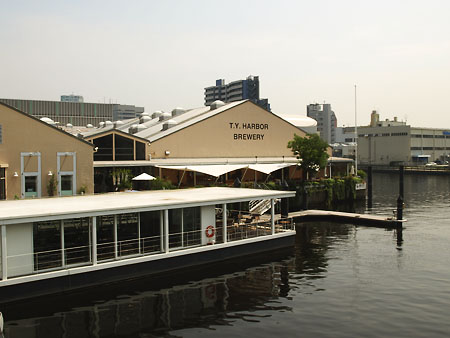 It's a decent enough restaurant, spacious, the food and service were excellent. They have their own microbrewery on-site. This was, of course, the main attraction for us both. Nick tried the IPA and I had the Imperial Stout. Both were pretty good. The stout had a good balance of the coffee and creamy tastes one often uses to describe a typical stout. The IPA, according to Nick was comparable to another one of his favorites, Hoppalicious. 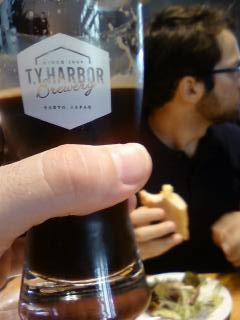 Located right on the water, this converted metal factory is worth a look. Average price for lunch with a small draft beer is around 2000 yen and goes up from there. Yeah, its definitely a bit pricey but not bad by Tokyo standards. And they have a bakery, a bar, outdoor dining area, and a floating lounge on site with Happy Hour from 5pm-8pm M-F.

A fire broke out today in one of the richest areas of Tokyo, famous for its department stores like Takashimaya, Mitsukoshi and the original "Japan Bridge" Nihonbashi.
I came home this evening to a building the size of a city block billowing black smoke, not more than 200 yards from my apartment.
I counted at least a dozen fire trucks and countless firefighters. I managed to capture a few seconds of video on my pre-paid. The smoke could be smelled for miles.

Look out for the drunk pedestrian who didn't seem to notice there was a building on fire and started yelling at the traffic cop.

Update to come when I know more.